Lessons Learned from the peacocks

I've created a page on my blog so that others can learn from my mistakes.  This is a copy of the first feature:  PLEASE! Learn from my mistakes.  Below are some "nothing held back" photos and comments of quilts I have made and the lessons I have learned from them.  My first quilt teacher told me that you should never point out your mistakes other people because they would probably never notice them anyway.  And while that might be true, I don't think it fits with my blog.  Someone out there can learn from the following.  I am certain of it!
First some universals
1) If your machine is making a funny noise, either something has gone wrong or it's about to, including but not limited to: a rat's nest made by your bobbin, a broken needle or one that is about to break, your foot is coming loose, your needle is coming loose, your top thread has somehow gotten tangled around the cat's tail and the two are locked in a winner takes all game of tug-o-war which won't be pretty.
2) The needle down function of your sewing machine can be your best friend!  I don't know how many times I've saved myself, not only when quilting, but even with piecing.  The fabric doesn't move until you are ready for it to move.  This includes when the cat has decided to rearrange your quilt by pushing it off the sewing table, or when the kids want to "look" at what you've been working on.
3) Piecing your backs is a great way to practice and add interest - BUT, don't make the blocks too small, or it will take FOREVER to finish your back - maybe longer than the top took.
The peacock quilt
1) I love to piece my backs, see above.  Did I learn the lesson not to piece too small the first time I did it?  NO!  I had all these lovely little crumbs left over from the flying geese that were just begging to be incorporated somehow into the back.  Thus, these pinwheels were born. 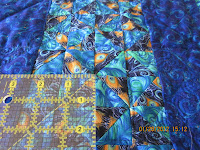 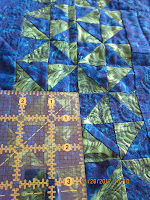 I added them with some bigger pieces for the back so the back didn't take too long to come together. HOWEVER,  I didn't press the seams open.  I despise pressing seams open and I really didn't think much of it until I got to the quilting portion of the quiltmaking.... and there ended up being LUMPS in parts of the quilt.  Nice.  I hope my mother will forgive me.
2) I used spray baste - I am shaking my head as I type this.  I have used it for baby quilts or smaller projects in the past without issue, but given the size of this one and the fact that I lacked 3 friends to help me with the sandwiching, I had trouble with it.
Problem A - I tried 4 times to get my back on straight, and it just wouldn't cooperate. So, it is a little crooked, which you can see at the bottom edges. 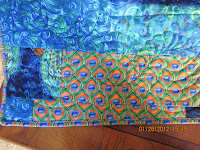 And since I actually started with a square back, that extra fabric hid itself somewhere in the middle and I have a few places where the quilting shows puckering and pleating.
Problem B - I mentioned I had trouble smoothing out the quilt.  Just when I thought I got it smooth, started the quilting process and got a fair way through it before I realized that some of my seams, especially the long ones of the border had actually flipped to the other side (probably from me repositioning the fabric in my attempts to smooth it). 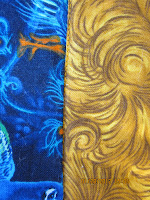 So instead of flipping my in-the-ditch quilting back and forth, I just stayed on the side it was supposed to be on, and hope that with multiple washings that you won't be able to see it.
3) I wanted feathers on the border, but couldn't even draw them correctly.  And of course, I wanted them to be consistent, so I decided to print out my feather pattern on foundation paper.  The week before I attempted this I took a class in paper piecing from Carol Doak and she educated us in how hard it was to find proper foundation paper.  You want one that is sturdy enough to print on, be sewn through and still give stability, but one weak enough to tear apart when removing and not pull out your seams.  Well, I had purchased some paper before the class (NOT Carol's brand) and I figured I would give it a try.  Evidently, I did not choose the right paper!  It did not release as I hoped.  In addition to have some bits of paper that hung around until that first washing, I also managed to pull some of the stitching out of a few areas and actually had to go back and "reinforce" those areas with additional stitching. 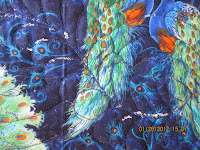 There were some benefits to using the paper: a) I was able to achieve some consistency in the feathers, b) I was able to print multiple papers and  easily space them according to the length of each border, c) I built muscle memory over the course of the quilting (I might even be able to draw a feather now).  However, there were some drawbacks to this method of quilting: a) the paper makes it hard to gauge stitch length (I found myself stitching much smaller than I would like), b) it is also hard to see tension issues, especially on top, c) because my paper did not release easily, it actually took me as long to pull all the paper off as it took me to quilt some of the borders, plus I had a big mess of all that paper.
To try next time: piercing my paper with an empty needle, then using marking powder to get the image on the quilt.
4) I usually bind by hand.  It was how I was taught in my first class and I like the look.  BUT, it takes forever sometimes.  I was running low on time with this quilt, so when it came time to bind it, I couldn't help but try out machine binding.  After all, it was supposed to be faster (and it was!).  I watched a few You Tube videos, and I went for it.  One of the benefits mentioned in a few of the videos is that you can actually use some of those decorative stitches that your machine has - well, if I was going to try out the method, I was really going to give it 100%!  So I picked a stitch, and gave it a go.  I am 85% sure that the stitch is supposed to straddle the edge of the binding, but I actually liked the way it looked away from the edge a bit.  Picture 2 below is the stitch line I am supposed to be covering, but once I was reasonably sure that it was anchoring enough, I continued around the edge.  Here is how it turned out. 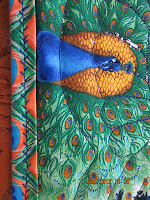 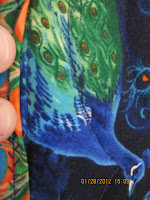 5) Thread for quilting - I am still building my quilting skills, as such, there are some things I feel more confident about than others.  If I am doing something I am confident about, I feel it is ok to choose a thread that will really stand out and be seen.  Whereas, if I am less confident with what I am doing, I choose a thread that will blend into the fabric.  On this quilt, I felt confident doing the scallop-like shapes in the blocks, so I chose a variegated thread with some sheen.  I felt a whole lot less confident when it came to the feathers on the border, so I chose a navy thread that you can barely see.
One other tidbit about thread: I learned in the long arm class by Dawn Cavanaugh recently that you will have fewer tension problems if you use the same thread in both your top spool and bobbin.  Tension is basically a tug of war, and if one thread is stronger than the other, it can cause problems.  Using the same thread doesn't always give you the look you are going for, but when possible, this trick might just save you some headaches!
I am sure there were a few more things I learned from this quilt, but I must not have written them down.  Until the next quilt...
Posted by Newbie Jen at 9:15 AM