Anytime I have a lag in quilting time/mojo, it seems it takes one of two things to get me going again.  Either it is a good swap or it is a One Block Wonder quilt.  This time around, it was swapping that got me back in the studio in 2021.

Starting in January, I started keeping my eye out for my favorite swap of the year - May the 4th, a Star Wars swap.  As the middle of March approached, it was looking like it wasn't going to happen and the previous host finally admitted that she wasn't going to do it this year.  I was bummed but still determined to do a swap when I saw a call out for the #booknerdswap.   Being a huge Book Nerd, I thought this swap would fulfill the itch to create.  Boy did it!  One of my partner's favorite books was The Voyage of the Dawn Treader by C.S. Lewis and one scene in which a boy named Eustace who had been turned into a dragon because of his selfish thoughts is transformed back into a boy with Aslan's help.  I reread the book and knew I had to attempt to interpret the scene.  This was the result: 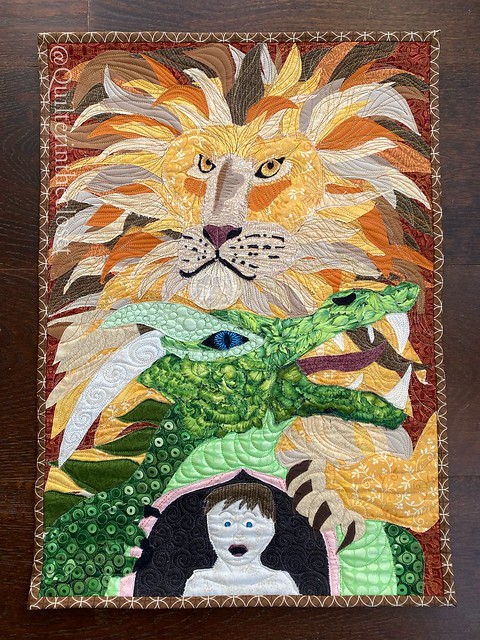 I think it turned out pretty well.  I was most nervous about getting Eustace to look like a real boy.  Whether it is drawing or another medium, doing people intimidates me.

About the time I was halfway finished with my Book Nerd swap mini, I got the news that the May the 4th swap would indeed happen, just with a new host.  I was ecstatic.  I got my partner's information and froze.  Turns out my partner's favorite character was one that I wasn't familiar with.  Here I thought I was a pretty up-to-date Star Wars fan but it turns out there are a bunch of aspects of the Star Wars multiverse that I was ignoring.  This realization led me down a rabbit hole that I am still exploring.  Initially, it had me binge-watching the entire Star Wars Rebels animated series to figure out who Kanan Jarrus was and why my partner thought he was so great.  Turns out the series is pretty good and Kanan is a worthy character.  I ended up making the below mini using the design aesthetics of Angela Bowman, a very talented quilter who often participates in the May the 4th swap.  She has done a bunch of foundation paper pieced quilts where she breaks up the image into a grid first.  If you have time, check out some of her amazing quilts on Instagram @angelabdesign. 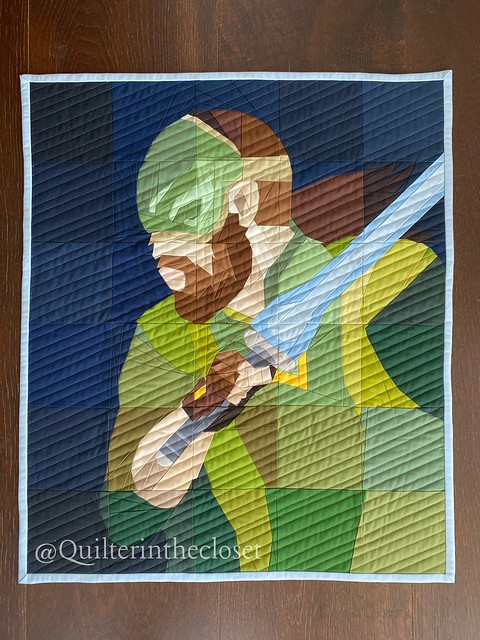 I thought Angela's process would make the FPP easier - it did and it didn't.  I took the decision of where each piece should be out of my hands, but I still had some very complicated pieces in the middle of the quilt.  That also might have been my fault since I was pretty married to the design.  I do like how the finished quilt looks like you are viewing it through a piece of shattered glass.  I may have to revisit this technique again sometime (maybe with a simpler design though, lol).

I used over 30 colors of Kona Cotton in this quilt, so my stash is now flush with different greens.  Those will come in handy later.

So now we get to the sad part.  As we were approaching the swap deadline, I made a joke about how I was secretly hoping my partner would disappear so I could keep the quilt I made.  Well, the universe answered.  My partner went MIA.  I really hope it wasn't due to some tragedy and that my partner isn't laying in a hospital bed somewhere or something else terrible happened.  Sadly, it is where my mind jumped to first given the state of things in the world today.  I really hope that is not the case.

I was worried but also disappointed, selfishly, because I really wanted to know if my partner would be blown away by the effort I made to create a quilt so individualized to my partner's information.  It took me a few minutes to get over my selfish self and move on to the more immediate issue - because my partner went MIA, there was someone else out there waiting for a quilt.  I offered to be a quilt angel right away.  I had the time that week and I NEVER have a shortage of motivation and inspiration for Star Wars quilts.

My new partner's favorite character is Han Solo.  Oh my gosh, I was over the moon.  I love Han too!  Who doesn't?  And there are so many great ideas out there for Han (with and without Leia).  I settled on a graphic design by Rogan Voight and got to work. 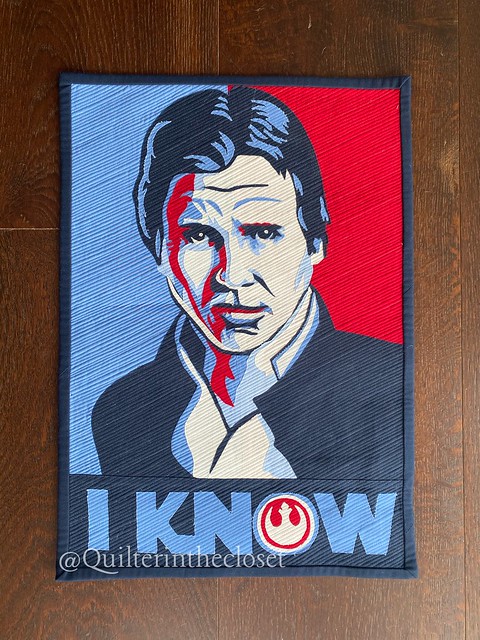 Surprisingly, this quilt came together so fast!  Bless the miracle of Steam-a-Seam 2 Lite!  Looking at a picture of the design, I drew out Han's face using similar shapes from the original design.  Of course, as I was quilting the quilt, I had the epiphany that I probably could have found a way to print out and trace the darn thing!  Yeah, sometimes my brain doesn't work great.  I think I got the eyes pretty close, but I know I was way off on the mouth.  Oh well, it still looks like Han... right (fingers crossed)?

I quilted this mini with tiny little straight lines - about 1/8 inch or so.  I used Superior Thread's Monopoly for the first time.  I gotta tell you, it was SO much easier to use than similar products from other manufacturers that I've tried in the past.  I even once had one get all tangled up in my tension disks and swore off nylon monofilament until now.  I'm glad that I tried it and it worked out so well, especially since I think I will be needing invisible thread more in the future.

There you have it.  Aslan and the dragon really stretched my quilting muscles the most.  Not only did I have to come up with an original design, but it also had me doing fabric collage again for the first time in years.  I want to be using that technique more in the future.

Kanan challenged my FPP skills.  I thought I was pretty good at paper piecing but there were a lot of little sections within that design that I struggled getting put together.

With Han, it was my drawing skills that got challenged.  I am not very good with a pencil so I rely on breaking an image up into a grid and focusing on each section.  Doing it that way allows me to complete an image in a more abstract way and takes the pressure off me getting everything right and proportional from the get-go.  Then I can go in and trace the resulting shapes onto fusible and put them together to form the finished image.  Obviously, this system relies heavily on having an image to look at, to begin with.  I'm not sure when, if ever, I will be comfortable just drawing something from my head.  I hope that day will come.  For now, this is where I am on my artistic journey.

Until I have something more to share, have a good one!